"It's Summer and We're Running Out of Ice"

Detective Wade Tillman a.k.a Looking Glass is a main character in HBO's Watchmen.

Wade Tillman is a native of Tulsa, Oklahoma. His past as a child before November 2, 1985 is largely unknown. However it is known that he at least had a father and was at one point an active member of the Jehovah's Witnesses.

On November 2, 1985, Wade went along on a missionary trip with other youth to preach to "the sinners" about impending nuclear annihilation in Hoboken, New Jersey. They stopped at a Carnival where Wade tried to speak to a group of Knot Top gang members. While the men of the gang harassed Wade, a young woman named Roxi—who was part of the gang—stopped them and took Wade by hand farther down the carnival and into the Hall of Mirrors. Initially the two spoke of what Wade was doing in New Jersey and Wade explained that he along with his congregation believed the end was near and that midnight would be the Doomsday Clock (as the United States and Soviet Union were on the brink of nuclear war). Roxi then offered to have sex with Wade given the circumstances before removing all of his clothes. However Roxi would run off with them leaving Wade behind in the Hall of Mirrors. Just as he lamented being a sinner and for being tricked by her, a giant alien squid teleported into New York City across the harbor. The Psychic blast emitted killed millions but Wade was protected by the mirrors from the blast and survived the attack. From that moment on, Wade was traumatized and gained fear and anxiety of Squid Attacks.[1]

Wade and his father would then design a bunker similar to the nuclear fall out shelters of the 1960s to the 1970s. This was done to help ease Wade's anxieties regarding them. As another precaution, Wade would take to wearing masks made out of a foil-like material called "reflectatine" over his head to protect his mind from psychic blasts and modify a red cap with reflectatine inside. He would later on become a consultant for research and focus groups to determine if those tested liked the products being sold or advertised. This gave Wade a unique skill supposedly able to determine whether or not someone is telling the truth.

After the White Night in 2016, Wade would apply to join the Tulsa Police Department due to Officers now being allowed to wear masks on the job. Becoming a Detective allowed the paranoid Wade to wear reflective reflectatine masks almost constantly and out in the open as he wasn't allowed to as a civilian. Due to his mask resembling a mirror, Wade's superhero identity is referred to as "Looking Glass".

As an adult, Wade would marry Cynthia whom he would remain with in marriage for seven years before divorcing her. This was due to not fully overcoming his anxiety and trauma regarding squid falls.

In 2019, on the night of a Seventh Kavalry shooting of a police officer, Wade goes along with Chief Judd Crawford to visit the hospital. Wade was most likely a first responder as it is he who reveals to Judd what was found at the scene of the crime and mentions a "head of lettuce" thrown into the Officer's car. To which Judd sarcastically asks if "there any croutons" which Wade responds honestly. Later, Wade is present along with the rest of Tulsa P.D. to watch the cryptic message from the Seventh Cavalry. Wade along with Red Scare and other officers voices that he feels his life is at risk which is what overturns the rule to use firearms.

Wade then interrogates the Seventh Kavalry members that Sister Night apprehended in "the Pod". After several minutes, Wade concludes that he indeed is one of the Kavalry which is when Sister Night brutally beats the individual in order to find out where the Kavalry's base is.

After the murder of Chief Judd Crawford, Wade is one of the officers to examine the crime scene. He divulges to Sister Night exactly how Judd was murdered and seemingly interrogates Angela over Judd (as the two had dinner with their families the prior night). Later, Wade is present with Angela, Red Scare, and a massive police force for a raid on Nixonville. Wade notes Angela not acting like her normal self in not participating initially on the raid. Angela then saves Wade from assault by an attacker and watches her walk off.

At home, Wade watches the premiere of American Hero Story: Minutemen, wearing his reflective mask still despite not being on active duty.

Wade is later met by Agent Laurie Blake of the FBI in the middle of his interrogations of members of the Seventh Kavalry. The two discuss events which have transpired in Tulsa. During the funeral of Chief Judd Crawford, Wade appears to have been present as one of the masked police officers.

The day after Chief Crawford's funeral, Angela Abar visits Wade knocks on the door of his Squidfall shelter. Wade lets her in and shows her photos of the squids that he took during the last downpour. Angela notes that he's weird and Wade points out that she is as well, and asks why she's there. She shows him a pill bottle that she found in the car and asks Wade to have his ex identify the pills inside. Angela makes it clear she doesn't want them examined at the precinct lab, and Wade asks if it's related to Judd's murder. She points out that he was a racist and shows Wade the Klansman robe she found in Judd's close, and he says that they're old school. Wade suggests that it's a keepsake from Judd's father, and Angela asks him to hold on to it for her. Wade agrees and warns Angela that Laurie is weird too.

Wade dresses somewhat casually on the job and as a civilian. His attire is simple, shirt, button up, jeans, and boots. However as Looking Glass, Wade wears a complex reflective mask resembling a mirror (hence the moniker). When he isn't wearing his mask, Wade wears a red baseball cap with an inner lining of the reflectatine material that his mask is made of, when he is at home and while not on police duty. He possesses at least two reflective masks - one located within a safe inside of his home and one in another safe inside of a garage.

Physically, Wade is a short Caucasian male with curly brown-reddish hair and blue eyes. He has a handle bar mustache. Wade might best be described as lanky and appears to not be much of a combatant like Sister Night or Red Scare.

In and out of costume, Wade has a dry, sardonic personality. He speaks in a slow somewhat bored sounding drawl whether at home, speaking to fellow Detectives, or interrogating suspects. This makes much of his true thoughts a mystery to most others although he may be the most transparent.

As a result of being present and surviving the Squidfall attack in 1985, Wade has deep-seated trauma and anxieties towards squidfalls and interdimensional attacks. Although somewhat functioning as a citizen, this trauma still has impacted his daily life. He wears mirror-like reflectatine atop of his head almost constantly in order to protect himself from a psychic attack. He has trouble maintaining relationships and as stated by his ex-wife Cynthia also tends to fall for women who hurt him.

He has several sexual hangups, as he was traumatized by his first sexual experience. He has since been unable to keep any relationships with women, not trusting them to not run off with his clothes. 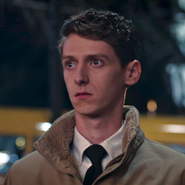 Retrieved from "https://watchmen.fandom.com/wiki/Wade_Tillman?oldid=18035"
Community content is available under CC-BY-SA unless otherwise noted.