Tales of the Black Freighter is a pirate/swashbuckling-themed comic book series.

Shying away from mainstream adventures, Tales of the Black Freighter's radical and innovative stories show a disturbing reality against metaphysical terrors and perverse comments on the human condition. They narrate the dark and sinister tales of the Black Freighter (named after a song in the Threepenny Opera). It is a hellish phantom ship that collects souls of evil men to serve its bloodstained decks, captained by a mysterious, demonic figure that is also perhaps an undead sailor.

Tales of the Black Freighter was published by National Comics and was contributed by writer Max Shea and star pirate artist Joe Orlando, who was later replaced by Walt Feinberg.

It was first published May 1960 and the first six issues included the back-up feature Galapagos Jones (which was not drawn by Orlando). Although it never topped the critically acclaimed Piracy and Buccaneers by EC Comics, it made a lasting impression and its early success was thanks to Orlando's majestic artwork.

The comic was cancelled after issue 31 and the departure of Shea but the classical stories had a lasting impact, as they were rediscovered and reexamined. Many were attracted by the controversy surrounding the last issues. They are mint priced for a thousand of dollars according to Overstreet Guide. The classical first 30 issues are reprinted successfully by DC comics in 1984 and 85.[1] 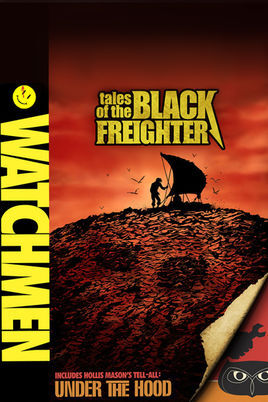 Tales of the Black Freighter was adapted as a direct-to-video animated feature from Warner Premiere and Warner Bros. Animation, released on March 24, 2009 as a tie-in to the Watchmen movie.[2]

Retrieved from "https://watchmen.fandom.com/wiki/Tales_of_the_Black_Freighter?oldid=22716"
Community content is available under CC-BY-SA unless otherwise noted.