She Was Killed by Space Junk

She Was Killed by Space Junk

"Men who end up hanging from trees with secret compartments in their closets tend to think of themselves as good guys. And those who protect them think they're the good guys too. But here's the thing about me 'Sister Night'... I eat good guys for breakfast."

Following a late-night visit from the senator who authored Masked Policing Legislation in Oklahoma, FBI agent Laurie Blake heads to Tulsa to take over the recent murder investigation. The Lord of the Manor receives a harshly worded letter and responds accordingly.

Laurie Blake enters a Manhattan Booth and calls Mars and tells Doctor Manhattan a joke about a bricklayer teaching his daughter how to lay bricks, and coming up one brick extra. His daughter throws it into the air, and Laurie says that she messed up the punchline.

In Washington, D.C., Laurie enters to a branch of the National Bank and robs it. As other shooters among the customers fire shots, a costumed adventurer named Mister Shadow drops into the lobby and takes out the shooters. Laurie takes a hostage, and tells him that they're FBI and they tipped him off to trap him because vigilantism is illegal under the Keene Act. All of the agents reveal their badges, and Mister Shadow runs. Laurie shoots him and he falls through the glass door. The FBI secure the crime scene and take Mister Shadow away. Laurie cuffs him, and protesters ask why she's arresting a hero. She says that the vigilante is a joke, not a hero, and walks away.

At home, Laurie puts a white mouse in a covered cage, then opens a case with something glowing blue inside. There's a knock at the door. After a moment she opens it and finds Senator Joe Keene there. He congratulates her on capturing Mister Shadow and invites himself in. He looks at the owl inside of the covered cage and asks Laurie to go to Tulsa to take lead on an investigation. Keene wants Laurie to investigate Judd Crawford's murder and figures the Seventh Kavalry isn't responsible because they didn't take credit. He suggests that it's a vigilante, and notes that other cities are masking their policemen because of the success of the Defense of Police Act that he authored. Keene suggests that if he becomes President, he could pardon Dan Dreiberg.

Laurie tells Manhattan a joke about three heroes trying to get into Heaven. The first hero, Nite Owl II, never killed anyone and God sends him to Hell for not being violent enough.

The next day, Laurie goes to FBI HQ and attends a briefing on the 7K. Agent Dale Petey inserts an excerpt of The Rorschach Journal to provide "psychological context", but Deputy Director Max Farragut says that it isn't the 1980s and no one cares about Rorschach. Farragut continues with the briefing, talking about how Judd was one of the few survivors of White Night along with fellow officer Angela Abar. The cops donned masks and peace returned to Tulsa until Judd was hanged. Farragut tells the other agents that Laurie is running point, and Laurie says that she's the only one going there because the Tulsa Police Department won't cooperate with FBI agents. She finally agrees to take Petey.

On the jet to Tulsa, Petey says that he brought a mask to wear. Laurie tells him that he's a Federal agent and Petey hastily puts away the mask. The pilot directs their attention to the Millennium Clock on the ground below. Petey notes that Lady Trieu had the clock built after she bought out Veidt Enterprises, and the media declared Adrian Veidt dead. The FBI agent notes that Laurie knew Adrian when he was Ozymandias, and Laurie asks Petey if he wants her autograph. Petey says that he knows Laurie was Silk Spectre II and points out that he has a PhD in history. He tells Laurie not to treat him like he's a fan, and Laurie says that she knew Adrian.

Laurie continues the joke with the second hero, Ozymandias. Ozymandias says that he saved humanity by dropping a giant alien squid on New York City, killing three million people. God declares that he's a monster and sends him to Hell.

Laurie and Petey examine the scene where Judd was hanged, Laurie then meets with Judd's wife, Jane. Later, Laurie and Petey drive to a warehouse and when a prison transport van pulls up, Laurie goes in on her own. Red Scare and Pirate Jenny toss a prisoner out on the tarmac, and Laurie flashes her badge and asks who they are. They identify themselves, and Laurie asks if Looking Glass is inside. The detectives go in, taking Laurie and the prisoner with them. Police are in the warehouse, processing 7K prisoners.

Looking Glass emerges from the pod with a prisoner, and Looking Glass reports that the prisoner is cleared of Judd's murder. Laurie goes into the pod with him and he explains how it works. She knows Looking Glass's secret identity of Wade Tillman, and he removes his mask and asks how he can help her. Laurie asks about Judd's autopsy, and Wade confirms that there was no toxicology screening because the cause of death was there. He wasn't at the raid on the cattle ranch, and Wade says that Sister Night got the location out of the prisoner during secondary interrogation. Laurie confirms that Sister Night is Angela, and Wade says that she took a personal day to work on the eulogy for Judd's funeral in a couple of hours.

Laurie continues the joke, saying that the third hero was Doctor Manhattan. God asks him how many people he killed, and Manhattan says that it doesn't matter and he knows God is sending him to Hell no matter what he says. He knows what God will do because he's seen it, and God sends Manhattan to Hell.

After going to their motel rooms to change, Laurie and Petey attend Judd's funeral. They hand over their guns to the policemen at the gate, and Laurie approaches Angela as the Abars arrive at the gravesite. She says that she's there to hope and talks with Angela over coffee later. Angela says that she's retired, and Frankie gives Angela her card.

At the service, Jane thanks everyone for being there and invites Angela up to give the eulogy. Angela talks about how she and Judd made a pact after White Night about what each of them would say at the other's funeral. A 7K bomber crawls through a tunnel. Angela sings the song Judd wanted sung. The bomber comes up in a nearby crypt.

Laurie claps to the music, and after a moment the other attendees clap with her to the song. The bomber puts on an explosive vest, steps out of the crypt, and approaches the gravesite. He explains that the bomb is connected to his heart and will go off if he dies. The bomber tells Keene that he's a race traitor and tells him to surrender himself or everyone dies. Keene goes to the bomber, and Laurie shoots the 7K man in the head. The bomb starts counting down, and Angela yells at everyone to run. She then drags the corpse into the grave and drops Judd's coffin on top of it. She runs away and the bomb explodes, knocking everyone to the ground. Angela glares at Laurie.

At the castle, Adrian works on a protective suit and then puts it on one of the Phillips clones. After moving to a safe distance, Adrian conducts his experiment and checks on Phillips. Phillips is frozen solid despite the suit, and Adrian kicks the body and curses in frustration. Another Phillips comes over and asks what went wrong, and Adrian says that he'll need a thicker skin.

Adrian rides off across the countryside to a herd of buffalo, takes out a bow and arrow, and kills one buffalo with a single shot into the eye. As he goes over to skin it, a man on horseback fires a warning shot at him. Adrian puts up his hands and returns to his castle, shoves past Phillips and Crookshanks when they try to present him with a cake, and goes to his study to meditate. Crookshanks comes in and says that he has a letter from the Game Warden. Adrian has her read it, and it says that they agree on the terms of Adrian's captivity. It appears that he's trying to free himself, and if so he will face grave consequences. Adrian dictates a response to Crookshanks, saying that his activities are purely recreational. He would never transgress the terms of their agreement, and is available if the Game Warden wishes to repeat his accusations in person. Satisfied, Adrian says that he hunts again at midnight.

That night, Adrian puts on his old Ozymandias costume and checks himself in the mirror.

At the cemetery, Keene tells the reporters that law enforcement are the heroes who kept him safe. Laurie watches as Keene says that the 7K is his problem and he won't leave until the war is won. Petey asks for Laurie's autograph, and she takes his coffee and goes to the crypt. Angela emerges from the tunnel wearing her night-vision goggles, and tells Laurie that it goes just outside the fence. Laurie offers her Petey's coffee, and admits that she thought the bomber was bluffing.

Laurie thanks Angela for saving them, and points out that there's nothing left for them to exhume. When Angela asks why, Laurie says that the 7K murdered Judd but they still have to consider the possibilities. Laurie points out that there were wheelchair tire tracks at the tree where Judd was hung, and that she found a secret compartment in Judd's closet; casually referencing her father, the Comedian, having a similar secret panel behind in his closet door where he kept his costume. Angela asks what was in it, and Laurie asks her what was in it since Jane told her Angela was the last person there. When Angela doesn't say, Laurie figures that there was a naked bust and something on it. She calls Angela "Sister Night" and says that she eats good guys for breakfast. Angela feigns shock, pours the coffee into the tunnel, and leaves.

Finishing her joke, Laurie says that God notices someone waiting: a woman. God says that he doesn't know who she is, and the woman says that she's the bricklayer's daughter from the first joke. The brick hits God in the head, killing him and sending him to Hell.

With 55 seconds left until her time ends, Laurie tells Manhattan that she doesn't know why she keeps telling him jokes because he never had a sense of humor. She says that sometimes it's nice to pretend he is listening to her, and humanity isn't worth Manhattan--or anyone--caring about.

The call ends and Laurie starts to leave. Suddenly Angela's car comes crashing down from above, seemingly out of nowhere. Laurie looks up to see a flare in the night sky where Mars is. She bursts into laughter, looking up at the sky. 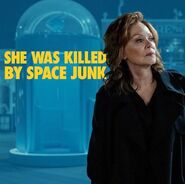 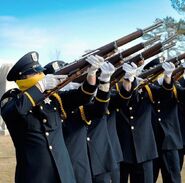 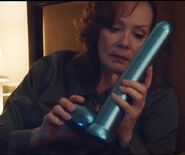 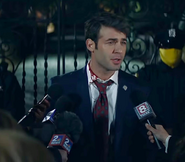 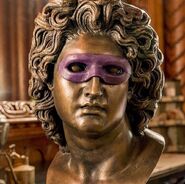 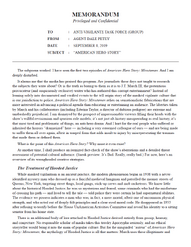 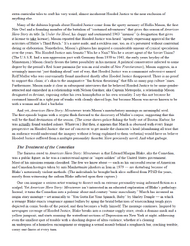 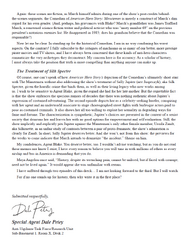 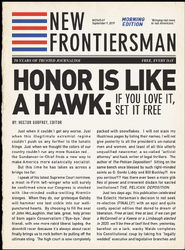 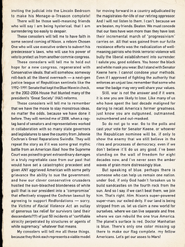 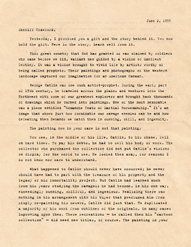 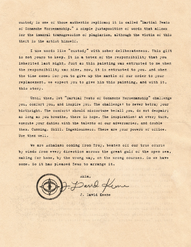