President Robert Redford (B. 1936) is a character in HBO's Watchmen, 39th President of the United States.

Redford’s final film as an actor was Out of Africa. Several of the films Redford had in production prior to his election retained him with a producing credit. In 1994 he became the first president to be nominated for an Oscar (for Quiz Show) while in office.

Robert Redford entered politics in 1986. One of his early causes was diversifying the Sundance Labs into a network of art colleges.[1]

Following the tragedy of 11/2, Redford challenged incumbent President Richard Nixon in a bid for the Presidency in the elections of 1988. His running mate was California Governor Jerry Brown.

After being defeated by Nixon, Redford thought of quitting politics.

Since taking office, Redford has pushed the country down a much more liberal path than either Ford or Nixon, signing into law policies like the Victims of Racial Violence Act, along with placing strict controls on the sale of tobacco and firearms.

After Nixon died in office and Gerald Ford ascended to the Presidency, Redford rode to victory in his second run for the White House with Nebraska Senator Bob Kerrey as his running mate.

Redford's second term ended with the Supreme Court coming under the control of more liberal jurists. With approval ratings in the mid-sixties, Redford made the bold move of replacing Vice President Kerrey with Illinois Senator Carol Mosely Braun as his running mate in the 2000 election.

Author John Grisham is retiring from the Supreme Court soon. Care to comment on his tenure on the court?

In 2002 Redford appointed John Grisham to the Supreme Court, confirming him after a contentious process in the Senate.

Associate Justice John Grisham is expected to retire from the Supreme Court. It is heavily implied, but not outright named, in an article by The New Frontiersman that Redford intends to nominate Alexandria Ocasio-Cortez to fill in Grisham's seat.

Redford has stated that he will not seek an eighth term in the upcoming 2020 Presidential Election. Vice President Biden is expected to run, along with Senator Joe Keene (son of Senator John David Keene who authored the infamous Keene Act).

On November 2, 1992, after a secretive investigation into the activities of Adrian Veidt, Redford announces to the world the true nature of the Squid and its creation at Karnak. The revelations lead Veidt to be declared as an international fugitive, and cause the Russians to accuse the United States government of having aided Veidt's plans. In a mere 20 days, the relatively stable global order is decimated, leading to a collapse of the European Union, threats by Russia to invade Poland, and the development of missiles by North Korea that can reach as far as Texas. On November 22, 1992, in response to the destabilizing domestic political situation in the United States, coupled with immense tensions with Russia, Redford shuts down the free press, and replaces it with the National News Network, a state-run broadcaster (ironically) headed by conservative William Buckley Jr. As riots break out in New York City, Russia invades Poland, triggering a nuclear response from the United States. 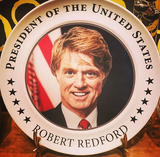 Retrieved from "https://watchmen.fandom.com/wiki/Robert_Redford_(character)?oldid=18632"
Community content is available under CC-BY-SA unless otherwise noted.