Watchmen Wiki
Register
Don't have an account?
Sign In
Advertisement
in: Pages with reference errors, Characters, Article stubs,
and 10 more

For other versions of Veidt, see Ozymandias (disambiguation).

"To answer your question, you get to be a superhero by believing in the hero within you and summoning him or her forth by an act of will."

Adrian Alexander Veidt is a former superhero and billionaire industrialist who draws inspiration from his hero Alexander the Great and the Egyptian pharaoh Ramesses II, for whom he is named. A child prodigy, Veidt graduated from high school and college before he was 18 and learned the art of lying as he hid the full scope of his brilliance for most of his childhood after being accused of cheating. When he inherited his family's fortune upon his parents' death in a car accident, Veidt gave it away to see if he could be a success by himself. Veidt traced Alexander the Great's path across the globe and ultimately returned to the United States, where he became a successful businessman.

When his business partner and love interest, Miranda St. John, overdosed on heroin, Veidt decided to avenge her death as a superhero. His costume was conceived as a Halloween costume but he quickly developed a name for himself as a hero, calling himself Ozymandias.

Our community needs more information on this page! Can you help out? Click here to add more.

Adrian has short blond hair that is always neatly kept, bright blue eyes, fair skin, and a muscular yet lean body. In his civilian life, Adrian normally wears nice business suits, sporting the colors purple and yellow. Doug Roth described his standing as almost divine, and his smile as something between Jackie Coogan and JFK.[1]

His Ozymandias costume is a golden bodysuit, slightly covered in purple robes. He has purple shoes, a gold headband, a gold belt, and a long purple cape that connects to his robes. He used to wear a purple mask, but after his retirement, he decided to go without because everyone knew his true identity.

Adrian Veidt had an extremely colorful personality which gave him the large reputation of being caring, conscientious and a pacifist, who was a vegetarian and never resulted in killing during his cases, although he had to change his stance by killing innocent people so as to not leave any traces of his plan. He was one of the most respectful and consistently left-leaning of the superheroes and as a mogul, he was known as a benevolent philanthropist. Critics included the right-wing New Frontiersman, while the Comedian called him "an intellectual dilettante that dabs in national affairs that shouldn't concern him".

He studied science, art, religion, and philosophies. Futurology is one of the most interesting subjects for him. He likes avant-garde music like Cage, Stockhausen, Penderecki, Andrew Lang, Pierre Henry, Terry Riley. He also likes electronic music, like Jamaican dub.

Despite his caring, pacifistic and conscientious demeanor, Veidt actually kept his true colors hidden from anyone else, and it came out to light when he confronted with his former friends at his house.

Veidt's true nature was revealed to be that of an extremely arrogant, egotistical and cold individual which appeared to be the ultimate personification of destruction following the reason that his plan is known to be destructive, and that is Veidt's best-known feature which is that his destructive personality knows no limits, and even if he is aware to the dangerous consequences of his plan, he doesn't show even a little bit of compassion, mercy or even thought about the innocent lives which his plan is taking part of, which means that he is truly sinister and psychotic individual. However, it is important to remember that Veidt is not a sadist because that even if he doesn't show any compassion or mercy towards the innocent people that he wipes out in the path, he is not enjoying their deaths or their pain, but he indeed enjoys seeing that his plan succeeds, and this is what he likes; success.

In addition, he indeed showed to be an extremely megalomaniacal individual sharing crazy god complex, seeing himself as a real god, maybe the god of wisdom, and this is his greatest weakness; his amazing intelligence, following the reason that if other individuals which are superheroes like he was, for example, Batman, reveal his intelligence levels to be extraordinary and that he is counting on his intelligence all the time, enemies can utilize it for good in order to defeat him. His second weakness is his overconfidence and arrogance, which he is showing it the most, and this thing can be a really sharp tool for enemies in order to defeat him. 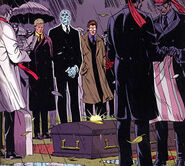 At The Comedian's Funeral

Happy with the outcome