Darryl Scheelar (film)
Chris Whitley (AHS; HBO)
Jake McDorman (HBO)
Nelson Forrest Gardner was a former member of the United States Marine Corps and a founding member of both the Minutemen and the Crimebusters.

Nelson Forrest Gardner was born in Zenith, Kentucky, on May 17th, 1908 to Albert and Matilda Gardner. He grew up a child of privilege in New York City. As a child, he was sickly and asthmatic, but years of physical training allowed him to get past his condition and eventually played football at Harvard University. Gardner enlisted in the Marines after washing out of Harvard, and served with distinction under Major General Smedley Butler in the Banana Wars. He was honorably discharged as a lieutenant in 1936 and began a career as a security consultant and military contractor. He would introduce himself as "Marine Lieutenant USMC Nelson Gardner: Free-Lance Consultant". His line of work gained him a significant amount of wealth, owning a mansion and several domestic servants.[1][2]

Nelson was advising the New York City Police Department on urban warfare strategies when he was inspired by Hooded Justice to become a masked vigilante, adopting the guise of Captain Metropolis.[3]

Using the skills he acquired in the military, he meticulously shaped his Captain Metropolis persona and attempted to eradicate organized crime in urban areas. He then purchased cheaply an old malting factory from the Canadian government, who were happy to unload it from their books. He turned it into his secret headquarters, finding the company's logo, "C.M.", convenient. He decided that coordinating a team of masked adventurers would be more effective against crime than each of them acting independently.[4]

He wrote a letter to Larry Schexnayder, a talent agent representing Sally Jupiter, aka Silk Spectre, informing him that he devised codes, passwords and strategic exercises for the "The New Minute Men of America" and asked for his cooperation.[5] He signed as "Captain Metropolis" and left the name of "Nelson Gardner" as his representative.[6] Once Gardner collaborated with Larry on forming the superhero team, the Minutemen were born: consisting of Silk Spectre, Silhouette, Nite Owl, The Comedian, Mothman, and Dollar Bill.

But Captain Metropolis was not ready to take the Minutemen public yet. He needed Hooded Justice and he worked diligently to track down the vigilante and recruit him to the team. Once Hooded Justice, the masked vigilante who had started the movement, was recruited Nelson felt secured in his decision and he introduced the Minutemen to the press as their "fearless leader".

When Ursula Zandt's lesbianism was outed by the press, and despite their homosexuality, Metropolis and H.J. voted her out as the revelation would damage the team's image. She was soon murdered by the Liquidator and Sally held themselves responsible. While investigating his murders, Metropolis and H.J. were after his traces in gay joints, before reaching his hideout. They found Sally, having already killed the Liquidator and after scolding for their hypocrisy, she announced her wish to quit.[8]

During those declining years, 2 mysterious figures disguised as comic book characters Bluecoat and Scout warned the Minutemen that Japanese saboteurs planned to destroy the Statue of Liberty. Captain Metropolis coordinated the assault to Liberty Island, which they reached with his private boat. Metropolis and H.J. covered Nite Owl and the two strangers who attempted to neutralize the threat.[9]

The mission was a success however its publicity would be disastrous and the whole event was covered-up. Although that would be the biggest feat by the Minutemen, it was buried and Gardner, who could not act without the warrior's honor and glory, was devastated.[9]

The Minutemen were eventually disbanded by Captain Metropolis himself in 1949 and he returned to his mansion. Because of his exemplary military service, he was given a passing grade by the HUAC in 1952. Hooded Justice disappeared that time and Gardner hadn't seen him since then and realized his "friendship" was not as deep as he hoped.[9][10]

In 1955 Nite Owl and Mothman visited Nelson in his mansion, asking for the whereabouts of Hooded Justice, believing him to be a child kidnapper and murderer. Gardner told them that he never learned his identity or his residence and hadn't seen him for years, and his only known residence was the Tower of Freedom.[10]

Gardner followed the two to the Tower and saw as he threatened them and Nite Owl snapped his neck killing him. He started crying and shouted them not to touch or unmask him. After everyone left, he demolished the Tower, either to offer his lost mate a warrior's funeral or vanish all traces of the crime.[10]

In 1960 as a representative of the former masked adventurers Nelson was asked about his opinion about Doctor Manhattan, the first person with superpowers; in obvious tension, Nelson just said that they were "pleased" for him.[11] To maintain his physical physique, Nelson followed a strict regimen of Canadian Air Force Exercises, but his beer belly had started to show.[12]

That year, Nelson along with former and new costumed heroes attended a Red Cross charity event[12] and was seen troubled, talking with the Comedian.[11]

Around 1962 he reunited at Sally Jupiter's house along with Hollis Mason and Byron Lewis, and thirteen-year-old Laurie Juspeczyk met them.[13] That year he read Mason's book Under the Hood where his relationship with H.J. was revealed. He lost his sleep and considered suicide. His lover Norbert Veldon was sent to Mason and threatened him to remove this information from the book.[14] He also called Sally Jupiter at night "crying his heart out".[9] However later, Comedian threatened Hollis and he decided to cut off the sensitive parts from his book.[10]

In 1966 Nelson attempted to come out of retirement to form a new league of extrajudicial avengers, the Crimebusters, to which he invited Rorschach, the second Nite Owl, the second Silk Spectre, Dr. Manhattan, Ozymandias, and former Minutemen teammate the Comedian, and spoke of tackling the "social ills" of America. But his plans never fully came to fruition; the Comedian (who knew that the world was not anymore the place it was in the Minutemen era) mocked him for wanting to "dress up" and play "cowboys and Indians", and further accused the older hero of seeking personal glory and a sort of mid-life crisis, which Metropolis insisted wasn't true. As the would-be members filed out, Metropolis begged them not to leave, telling them that someone had to "save the world." The crime display that he worked so hard on was burned and destroyed by the Comedian.[15] Gardner permanently retired shortly thereafter.

In the years following the disbanding of the Minutemen and the failure of the Crimebusters, Gardner began to realize how he drove Will Reeves away with his own racist attitudes and indifference towards the black community. His aborted effort to start the Crimebusters with a focus on the inner city was in part his attempt to make amends. On May 31, 1971, the fiftieth anniversary of the Tulsa race riot, Gardner modified his will to leave his entire estate to Reeves, and if he were to decline he would bequeath all proceeds from any auction of his Minutemen paraphernalia to the Southern Poverty Law Center. He even went so far as to order that his remains be cremated, with no funeral or grave marker, feeling it was what he deserved.

On the night of August 9, 1974, Gardner was driving northbound on Broadway in a Buick LeSabre in the general direction of his uptown mansion. He had attended a rally protesting the repeal of the 22nd Amendment. Gardner lost control of the car and crashed into a barrier at a high rate of speed. He ejected through the front windshield and was decapitated. (In a bizarre footnote, his head was never found.) At his request, there was no funeral or memorial and his remains were thoroughly destroyed. His only desire was for Will Reeves to be the sole beneficiary of his estate.[16][17]

Owing to his military background he had a strategic approach for crime-fighting as he was the brain behind the Minutemen and later the Crimebusters. He was also polite and reserved.[18] Though a soldier and a de facto leader, Metropolis often appeared timid, weak-willed and easily flustered.

Although a homosexual, Gardner had conservative and racist views and during his time in the Minutemen he made racist comments regarding the blacks and the Hispanics.[19]. It can be seen from the display in the Crimebusters scene that Gardner's views were very conservative, even reactionary. He regarded the liberal sentiments of the '60s as "social evils" that the Crimebusters should crush; furthermore, he was concerned by "Black Unrest", "Campus Subversion" and "Anti-War Demos".[15] It would seem that the world he wished to save was that of respectable, white 1950s America and the "social ills" he feared were the changes of the 60s.

Metropolis only appears in flashbacks in the Zack Snyder 2009 Watchmen adaptation. He has only one line in the film and is not present in the 1966 meeting. Ozymandias attempts to lead the 1966 meeting, calling the proposed team "the Watchmen". The David Hayter draft eliminated him entirely from the plot, and Dan Dreiberg was used as a replacement for the Crimebusters meeting scene, so as to make him more of a leader.

He is named for E. Nelson Bridwell and Gardner Fox. The reference to a grown man "playing cowboys and Indians" maybe a reference to Le Chiffre's scornful reference to James Bond's adventurous career as "a game of Red Indians" while the cold war was in fact "a game for grown-ups" in Ian Fleming's Casino Royale. 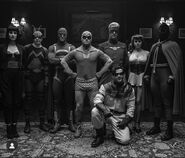 Retrieved from "https://watchmen.fandom.com/wiki/Nelson_Gardner?oldid=20511"
Community content is available under CC-BY-SA unless otherwise noted.