Start a Wiki
Our community needs more information on this page! Can you help out? Click here to add more.

Crushed to death by the quantum centrifuge that was destroyed by miniature ice squid.

Smartest Woman in the World
Sample #2346

Founder and CEO of Trieu Industries

"If You Don't Like My Story, Write Your Own"

"See How They Fly"

Lady Trieu was born in Vietnam in 1986 and is the daughter of Adrian Veidt after her mother Bian My, in a show of defiance against Veidt, inseminated herself with one of Veidt's own samples and escaped Karnak in the middle of the night without his knowledge. Trieu grew up highly intelligent due to Veidt's genetics, academically exceeding beyond those her own age. Recognizing Trieu's intellectual potential, her mother molded into “the world’s smartest woman" through controversial methods such as isolation, tough love, and enhanced transcendental meditation.[1]

She graduated from the Myanmar Institute of Technology (MIT) in 2001 when she was only fifteen years old with PhDs in astrophysics, nuclear fission, bioengineering, and nanochemistry. She would later purchase the university at the age of nineteen.[2][3]

Trieu established Trieu Industries, an international conglomerate that by 2010 would revolutionize the fields of medicine, energy, and nanotechnology. After becoming a trillionaire from the success of Nostalgia in 2007, Lady Trieu turned her attention to space exploration. Since 2010, Trieu has launched 50 Voyager-class probes into the galaxy, and in 2015, she began licensing her patented micro-fusion propulsion technology to the SDI alliance, China, and the Egyptian Union.[4]

The trillion-dollar company, would serve as a front to construct her quantum centrifuge in Tulsa as the "Millennium Clock".[5]

In 2008 Trieu traveled to Karnak, Antarctica to meet her biological father Adrian Veidt. Veidt isn't interested until she reveals that she knows of Veidt's manufactured squid attack on New York City in 1985. Adrian denies this, but Trieu proclaims that his actions were genius and points out that no one gives him any credit for it. She thanks Veidt for saving the world from nuclear holocaust, and he invites her in for tea.[6]

She points out that while the attack had stopped humanity from destroying itself, it only delayed the inevitable. Trieu wants Veidt's financial help to build a quantum centrifuge to extract the powers of Doctor Manhattan so she can enact a more permanent solution to world peace. Trieu reveals she knows Manhattan is on Europa and has launched a probe to arrive there in 2013 to visually confirm this. Veidt refuses to help noting that he gave up his parents' wealth to demonstrate he could achieve anything starting from nothing, and he offers Trieu the same. Veidt insists he will never call her "daughter".[7]

In 2012 Trieu bought Adrian Veidt's companies. When members of Veidt Enterprises’ board of directors visited Antarctica to seek Veidt’s blessing on the sale, they found Karnak to be unoccupied.

By 2017, Trieu Industries officially acquired the estate of Veidt Enterprises.

Trieu took a deep interest in Doctor Manhattan and had Manhattan Booths placed in major cities around the world. She successfully replicated one of Manhattan’s greatest creations, mass-producing synthetic lithium that reintroduced the electric car, and she built the “Eye over Mars” that displays video images of Manhattan building and collapsing ornate sandcastles on the surface of the red planet. She even funded a commission to prove that The Big Blue Cancer Panic perpetrated by the Nova Express in 1985 was a hoax.[8]

At some point Trieu discovered that Manhattan wasn't on Mars and that it's just a decoy going through the motions in a predetermined pattern. She believes that he's on Europa, and she designed and built a satellite to scan for Manhattan's unique frequency of radiation which would reach Europa in five years.[9]

In 2013 the satellite probe she sent out five years earlier finally reaches Europa. She had expected to find Doctor Manhattan on Europa, but discovered a message her father, Adrian Veidt, crying out for help in a message saying: SAVE ME DAUGHTER. In 2016, she designed and launched the first micro-fusion spacecraft which she sent to Europa to return Veidt safely back to Earth by 2018.

Through Will Reeves, she learned of Manhattan's identity on earth as Cal Abar, husband of Angela Abar. She also learned the Seventh Kavalry had discovered this as well and planned to capture Manhattan themselves, and Will asks for her help to wipe the Kavalry and Cyclops out.

In 2019 when her plan of returning her father back to Earth was to be completed, she had also created a clone of her mother Bian to assist her.

As Trieu's quantum centrifuge activates following the Seventh Kavalry's capture of Doctor Manhattan, Trieu teleports the Kavalry, Manhattan, Angela Abar, Laurie Blake, and Wade Tillman to downtown Tulsa with Bian and Adrian Veidt in attendance. She obliterates Cyclops and the Kavalry and triggers the centrifuge, but not before Manhattan teleports Veidt, Laurie, and Wade to Karnak, where they use Veidt's squid-rain-making device to send frozen squid projectiles in the immediate area. Though Trieu is able to destroy Manhattan before this, the squids destroy the centrifuge and kills Trieu before the transfer of power can be completed.[10]

Dressed in a silk costume and white gloves still low growth Vietnamese with short hair, but in the flashback scene she has long hair pinned up in a bun.

Lady Trieu, just like her father Ozymandias (Adrian Veidt) is very intelligent, but she shows narcissism and like her father wanted to cleanse the world of evil and ensure peace.

Lady Trieu just like Ozymandias in Alan Moore's Watchmen graphic novel turns out to be the real villain of the series in the last episode, she still shows good intentions and tries to help other people like Angela, who gave Nostalgia, whose owner is her grandfather.

To her enemies, she is very ruthless, cruel and very cynical, but if someone hurts or kidnaps a loved one for her she's becomes very sadistic and vengeful pure evil for example very aggressive and angry Trieu screams on Dr. Manhattan after teleported Ozymandias to Karnak and begins to reveal manifestations of rage, ordering him to reveal where Ozymandias is, but she can control anger and ignore him.

Copyright 2007 of her company 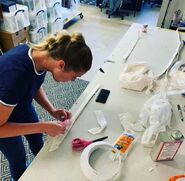 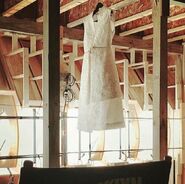 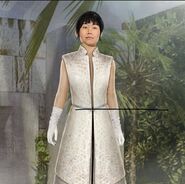 Retrieved from "https://watchmen.fandom.com/wiki/Lady_Trieu?oldid=18586"
Community content is available under CC-BY-SA unless otherwise noted.