Karnak is the private residence of Adrian Veidt, located in Antarctica.

As Antarctica is owned by no nation, Adrian Veidt took with him several Viet Cong refugees where they were safe during the purge sweeps of Vietnam.[1]

Upon returning to Karnak after securing his plan for world peace, Veidt lectures three of his Vietnamese servants on the origins of his superhero persona. However, Veidt also poisons all three men and opens the dome, letting in the frigid air, killing all the life within the terrarium.[2]

A large and luxurious complex, it consists of several buildings. It is served by a tiny landing strip.

Dark marble obelisks with rolling purple highlights lead to the fortress housing rooms of various themes.[1] Visible in the story are a vast gymnasium,[1] a large dining room, a room with a large pool, one containing a wall of television monitors from which Adrian Veidt can observe world newscasts and events, adorned with a mural of Alexander the Great cutting the Gordian knot,[2] and a meditation chamber containing an orrery.[3]

The complex also included a vivarium, a huge glass dome housing a terrarium where many species of plant and animal life were kept alive, despite the harsh climate outdoors.

Around the complex Veidt had installed eight tachyon generators which, coupled with another eight in orbiting satellites, preventing Doctor Manhattan from seeing the future clearly.[3]

Karnak also contained an intrinsic field subtractor much like the one that Osterman worked on at Gila Flats prior to the accident that transformed him into Dr. Manhattan.[3] 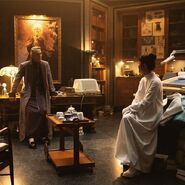 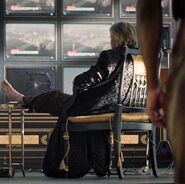