Hanged himself as an order from Will Reeves

Don Johnson
Judd Thomas Crawford was the chief of the Tulsa Police Department. During his tenure, Crawford was also the leader of a separate KKK-eqsue cell of the secret white supremacist, domestic terrorist organization Cyclops.

Judd Crawford was born on December 15, 1949 to a family with a history of work in law enforcement.

In high school, Judd played the lead role of Curly in their production of Oklahoma!.[3]

After graduating from high school, he enlisted in the United States Marine Corps and served under Captain Robert S. Mueller in the Liberation of Vietnam, a key battle in the Vietnam War, receiving multiple commendations for bravery during the purge sweeps of 1971 to 1973.

In 1977, he graduated from the University of Oklahoma at Norman on the G.I. Bill with a Bachelor’s Degree in Criminology. He was briefly a professional rodeo rider before he joined the Oklahoma County Sheriff’s Department in 1980. During his time in the Sheriff's Department he met and befriended Joe Keene while working on Joseph David Keene's security detail.[4]

In 2004 he moved back home and joined the Tulsa Police Department as a senior detective.

In 2017, he oversaw the Tulsa Police Department’s transition to masking following the emergency passage of DOPA, an Amendment to the Keene Act after the events of the White Night. In 2016, Judd was the Police Lieutenant for the Tulsa Police Department during the White Night and was supposedly attacked in his home during 40 simultaneous attacks against members of the police on Christmas Eve. While his arm was injured he provided emotional support to then official officer, Angela Abar. They were two of three survivors.[4]

Angela had also been seriously wounded and her partner Doyle and his wife had been murdered that night. Angela took in their three children; Topher, Emma, and Rosie, and Judd became their honorary uncle. Judd became close to Angela as one of the few survivors of the White Night and their families comfortably socialized with each other.[5]

Judd was named interim-chief and led a series of successful police actions against the Seventh Kavalry that seemed to cripple the organization. In 2018 he was appointed full-time chief.[4]

One night, after receiving a call informing him that one of his officers had regained consciousness following a shooting, Judd had been waylaid when his car's tires were punctured on the road. He was then attacked and hanged from a tree that Angela was later shown. According to reports he was aware and struggling the entire time and suffered up to the moment he died.[5]

The one to claim the murder as his doing is Will Reeves, which Angela found difficult to believe. Following Will's less than subtle hints to investigate Judd's closet for "skeletons," Angela used his wake to infiltrate his office and discovered a Klansman uniform behind a hidden wall panel pristinely on display.[5]

In She Was Killed by Space Junk, the profile that the FBI has of him lists him as a Caucasian male being whose height was 6'0 and weighing 190 pounds.

As a member of the KKK, Judd Crawford was a bigoted racist that hated black people. His racism is show to have reached violent extremes, as he masterminded a plan to incite black people to commit violent acts to worsen race relation between black people and white people.

Judd was charismatic and a good actor. Despite Angela's nose for "smelling out" white supremacy, Judd and June were able to get close to her family. And the rest of the police force saw him as a hero and ally to racial equality and justice. 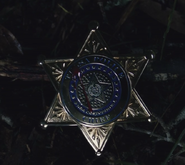 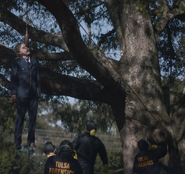