Construction Worker (formerly)
Calvin Jelani was a construction worker that died in Vietnam in 2009. With no family to claim his body, Jelani's identity was taken by Doctor Manhattan for his new human form.

Calvin Jelani was born on November 22, 1976, in Philadelphia, PA. He had a father who had heart disease and Alzheimer's. Calvin himself had a tonsillectomy at some point.

Jelani moved to Vietnam for work at Pyramid Global Construction before he was either laid off or quit in April 2009. Three months later, Jelani died of a heart attack. With no family or next of kin to claim his body, Jelani's identity was taken by Doctor Manhattan for his new human form, allowing him to date Angela Abar in public. 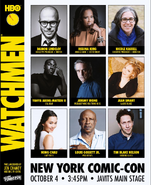